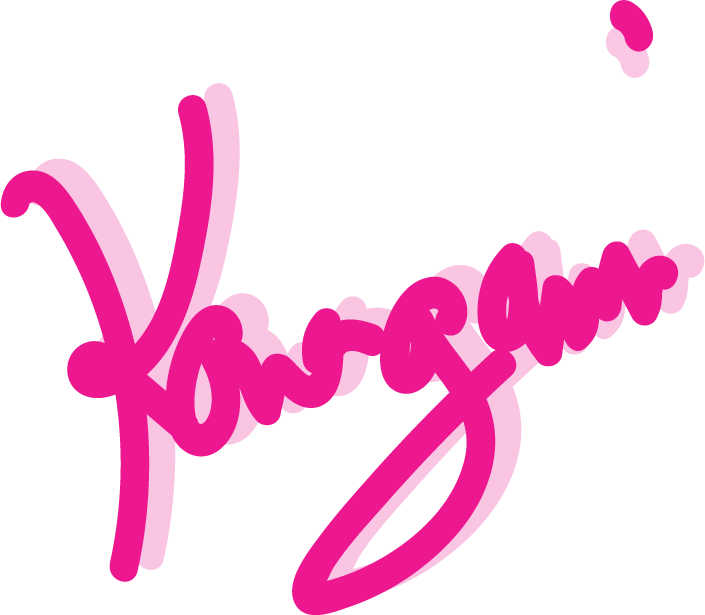 Autumn is the season of many delicious fruits, vegetables, and nuts. Autumn is traditionally a time to pickle lots of vegetables and spend the year making various jams so that they can be enjoyed in the winter as well.
Typical pickles are cabbage (sauerkraut) and cucumbers (pickles), both of which are very popular. During the cold rainy days of fall and winter, many warm and filling dishes can be prepared, such as soups and stews (e.g., soljanka).
In late summer and fall, apples, plums, pumpkins, chestnuts, hazelnuts, and other nuts also become ripe. These can be used to bake a variety of very tasty sweet treats and breads. A warm apple strudel for dessert on a cold day therefore puts a smile on everyone’s face, from children to adults.
I look forward to making and baking delicious evening meals with my students during our Live Zoom classes. And afterwards, you can end the day happy on the couch with your family. And the next day, you can look forward to making a very tasty special sandwich with the leftover sausage (leberkäse) as your bento.
I very much look forward to seeing you again and talking with you about autumn traditions as well as German autumn cuisine.

to know about me about Konagami about Contact about Policies

Sauerkraut is white cabbage that has been lacto-fermented and preserved. Sauerkraut is usually cooked with other ingredients and eaten as a side dish. It is also a common ingredient in East German and Eastern European soups and stews. It is internationally recognized as a typical German national dish. Preserving vegetables through lactic acid fermentation is a technique that has been practiced in many parts of the world since ancient times. In ancient Greece and the Roman Empire, the sour taste of Chinese cabbage was known in this way, and apparently so was the case in China.

In Korea, kimchi, a variant of sauerkraut, was developed in the 7th century. It differs from European sauerkraut in that it uses Asian ingredients such as Chinese cabbage. 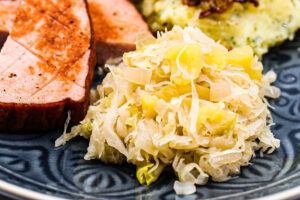 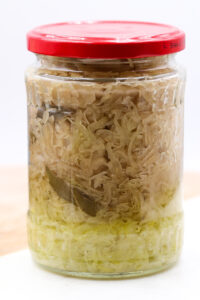 Pickles are pasteurized cucumbers pickled in sweet vinegar. The very small cucumbers are called cornichons [kɔrniˈõs]. Dill, yellow mustard seeds, onions, salt, and sometimes sugar and pepper are often found in the broth.
Because of its composition, cucumber is considered a particularly suitable food during pregnancy. Therefore, in Germany it is generally believed that if a woman feels the urge to eat pickled cucumbers, it is a sign of pregnancy.
Pickled cucumbers are often used raw or cooked, for example, in dinners with bread and cheese, potato salad, hot dogs, hamburgers, many East German and Eastern European soups and stews (such as Solyanka), fried eggs and fried potatoes (which is called a farmer’s breakfast), etc. 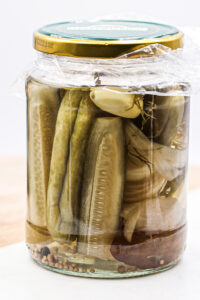 The name `cheese’ is simply derived from the box shape of the leberkäse. The sausage is placed in a square pan and baked at low temperature in the oven. These sausages can be made very easily and quickly with ground meat sold in supermarkets. So no special equipment like a mincer or filler is needed. You don’t even need a sausage casing.
Leberkäse is a traditional sausage from southern Germany. It can be eaten freshly baked and served warm, cut into thick slices and fried, served cold with sweet mustard on a bun roll like a sandwich, or cut into thin slices and served like ham on a bun. Cut into small cubes, leberkäse can be added to many soups and stews in place of small sausages, for use as a substitute for small sausages, for example. 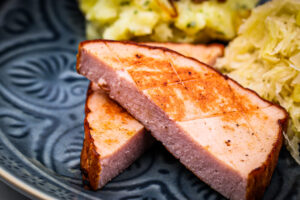 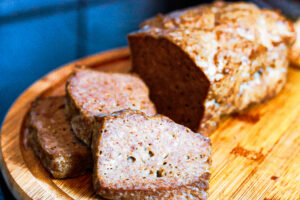 Sauerkraut is always mixed with other ingredients before eating. The most popular is apple sauerkraut. It is cooked with lots of apples and spices. It pairs well with fried Leberkäse, caramelized sweet onion rings, and creamy mashed potatoes. Instead of leberkäse, grilled sausages are a very tasty alternative. 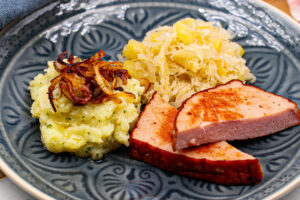 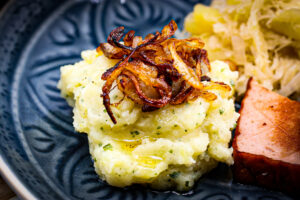 Szegediner Strew is a very rich-tasting variety of stew with Hungarian roots. It is the perfect meat dish for the cold season. The dish was also adopted by German settlers, including the Transylvanian Saxons of Romania, Hungary, and Bessarabia (now Moldova and Ukraine). The name ” Székely gulyás” in Hungarian, is not the city of Szeged, but the name of the Hungarian writer and poet Joseph Székely (1825-1895), “the man who inspired this exquisite dish” (according to Hungarian cook Karly Gundel (1883-1956) ), so perhaps the German name is misleading.
The dish is rich in sauerkraut, tomatoes, pork and beef. 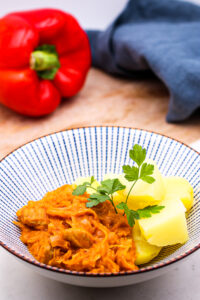 Soljanka is a classic recipe from the former East Germany. The sour and spicy stew consists primarily of leftover sausage and meat. This recipe was perfect for the German Democratic Republic, where it was often difficult to get the ingredients the way you wanted them. You can use canned goods or leftover meat that you have on hand at home.
Soljanka (Russian: солянка) probably originated in Russian and Ukrainian cuisine. Soljanka means “salted” and is derived from the Russian word “sol. The Soviet army brought the dish to the then “zone”. There, it quickly became a well established part of the kitchen. In addition to meat soljanka, there are fish soljanka and mushroom soljanka. 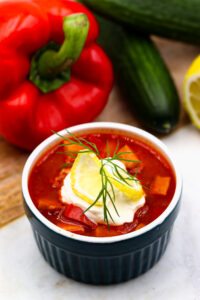 A warm green salad with honey caramelized fried mushrooms and a delightful sophisticated orange dressing. This is a delicious salad to serve on a cold autumn day with freshly baked bread or for dinner with cheese spaetzle or potato gratin. 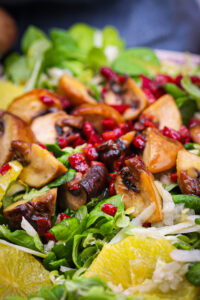 Dough containing rye flour or whole wheat flour is heavier than dough made with strong flour.
Therefore, it is necessary to use a strong sourdough to make a fluffy bread. The word “Sauer” in the word “Sauerteig” means “sour”. Sourdough contains a lot of yeast and lactic acid bacteria. This lactobacillus is what gives rye bread its characteristic sour taste and flavor. 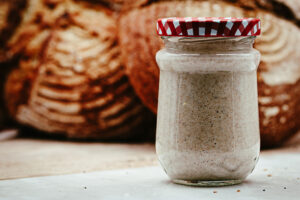 Chestnuts are one of the special ingredients that taste great in autumn. You can make not only delicious sweets using chestnuts, but also healthy and tasty breads. In addition to chestnuts, spelt flour is used for the dough to a great amount. This makes it possible to produce bread that contains more minerals and vitamins than ordinary bread made with wheat flour. This bread is also very suitable for diabetics. Since this sourdough is very mild, the taste of the bread does not have the sourness characteristic of sourdough. The bread has a very mild taste and goes well with all kinds of toppings such as jam, honey, cheese, ham, etc. 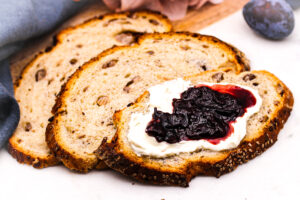 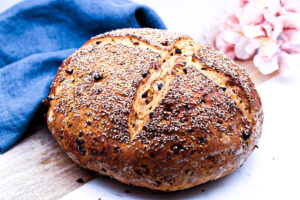 The recipe for this bread was given to me 20 years ago by a very old farmer’s wife at a weekly market in northern Germany. She sold it year-round for decades and it was very popular with her customers. My whole family loves this pumpkin bread and everyone always asks for the recipe. When I baked it for the first time with my students in Japan a few years ago, it was very popular.
Because there is so much pumpkin in the dough, the bread is very moist, bright yellow-orange, and tastes deliciously of pumpkin. It tastes slightly sweet and is very suitable for a sweet breakfast or afternoon snack, such as toasted with butter and jam. 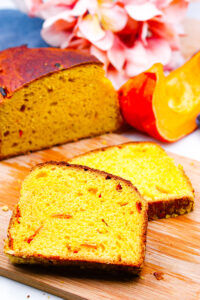 The history of Nut Triangles begins first in the city of Nürnberg in Bavaria. The first written references to Nut Triangles appear in 1700. Nut Triangles originally came about due to a lack of ingredients for “proper” pastry making. At that time, Wilhelmus Brandwein, a baker in Nürnberg, took on the challenge of the lack of ingredients and began to make pastries with alternative ingredients. The goal was to create a pastry composed entirely of flour and hazelnuts. Thus was born the first NuT Triangle. Of course, because sugar was a very expensive ingredient at the time, the taste was different and not as sweet as it is today.
Today, the classic Nut Triangle is a shortcrust pastry base with a layer of apricot jam, a thick layer of nuts, and a chocolate coating. The shape is always triangular. 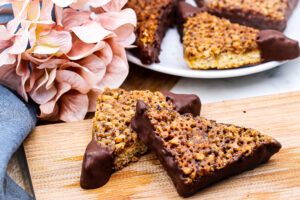 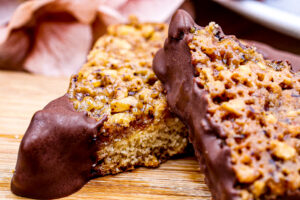 The strudel dough probably originated in Arabia, from where it was introduced to Turkey via Egypt, Palestine, and Syria. From there, after the conquest of Constantinople in 1453, recipes further developed from Turkish baklava or pita bread were probably introduced to Vienna via the Balkans. During the Donau dynasty, apple strudel (Hungarian: Almásrétes) was introduced to Vienna from Hungary, and during the Turkish sieges of the 16th and 17th centuries, the Hungarians learned how to make the wafer-thin hand-pulled dough. 1696, in the City Hall Vienna Library, apple strudel was introduced in writing for the first time.
Strudel is a pastry consisting of rolled dough with stuffing, baked or boiled. It originated in the territories of the Habsburg Empire and was later incorporated into their national cuisines (Austrian cuisine) and spread internationally.
Apple strudel usually consists of thinly sliced sweet and sour apples, dark-colored raisins, and breadcrumbs roasted in butter and seasoned with cinnamon and sugar.
Apple strudel is fresh, warm and crisp, and can be served cold or later served warm. It is often partially covered with icing sugar. Sometimes apple strudel is served with vanilla sauce, vanilla ice cream or whipped cream.
Apple strudel is one of Austria’s most popular national dishes. 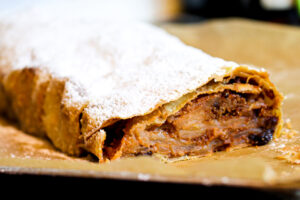 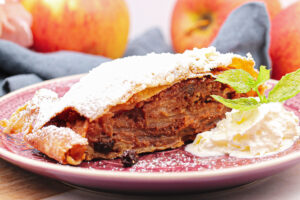 My grandmother used to make plum jam every autumn. My great-grandmother also made plum jam all her life. It is Christmasy because of the cinnamon and other spices, but it is delicious all year round. My grandmother used to make over 40 jars of jam every year when I was little, giving my whole family a year’s supply of plum jam. Since my grandmother passed away, my mother and I have made plum jam every year for everyone to enjoy, and my children look forward to new jars of jam every year.
Plum jam is delicious not only on bread, but also with cream in cakes, doughnut fillings, and cream puffs.
Usually fresh plums are used, but frozen plums, which are sold in supermarkets all year round, will also work. You can also make plum jam from dried plums.

Plum liqueur is a very special and easy-to-make Christmas gift. Even though it is made from plums, it is quite different from Japanese plum liqueur. Instead of Japanese plums, we use purple plums. We also use lots of Christmas spices and vodka for the base. We let it sit for at least a month before drinking, which means it is just in time for Christmas.
We usually use fresh plums, but frozen plums, which are sold in supermarkets all year round, will also work. You can also make a plum liqueur from dried plums. 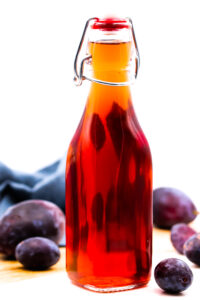 In this time period you will have 2 days with Zoom Meetings for asking the teacher questions, meeting with other students and cook and bake LIVE together.

In the time period of the LIVE Class you can enter and connect to the teacher and other students; choose your day and time freely.

The Zoom classes will get recorded for those, who cannot participate or want to listen to the teacher`s advise again.

During the Break Time you can bake the Leberkäse and prepare all ingredients for the second half of the class.

You need your VIDEO PAGE PASSWORD for access!! You can find it in your mail with the class details or on the "How to ...?" page of your recipe.
Click Here
Previous
Next
>Change LANGUAGE<
wpDiscuz
0
0
Would love your thoughts, please comment.x
()
x
| Reply